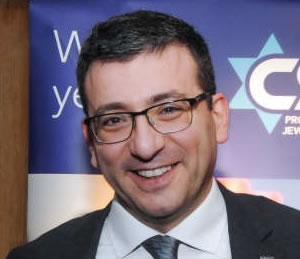 The Scottish Jewish Archives Centre presents, by Zoom, on

“The Swings and Roundabouts of Modern Antisemitism”

Originally from Glasgow, Mark Gardner is Chief Executive of the Community Security Trust (CST), which he joined in 1989, and he is a leading commentator and writer on contemporary antisemitism. Mark was awarded a Police Commendation for his role in helping lead Scotland Yard’s cross-London response to the 1999 neo-Nazi nail bomb campaign and had a prominent role in the April 2018 ill-fated Jewish community leadership meeting with the (then) Leader of the Labour Party, Jeremy Corbyn MP.

Please note, all bookings are online at:

You will receive the Zoom joining instructions with your booking receipt.

You may also purchase Friends’ membership at the booking site.

Tickets include one raffle entry: Friend of SJAC £13; Other £15.

All proceeds will help fund the work of the SJAC in caring for its collections and making them accessible.

The Raffle Prize will be announced on the night.

Thanks to the Scottish Council of Jewish Communities (SCoJeC) for their support and assistance.